Fortunately Steph, down from Johannesburg for a year, has a beautifully painted IG mech army and so I hauled my IG - the 24th Romanov Rifles and tarted them up a little.

The main reasons for playing though were:
The baneblade is a scratch-built kit I made from plastic card when the forge world kit was first released. In all that time it has never been in combat.

The table is something I have been working on in dribs and drabs for the last two years. Some of the pieces on it (the container terminal) are quite new, others date back a while.

I'm going to be making a lot more terrain for this table and it is all going to be art deco rather than gothic. Watch this space...

I have put up a few pictures here but the bulk of them are at the Laser Cut Card facebook page here: https://www.facebook.com/LaserCutCard (if you are on facebook then please "like" the page - I generally will update it a few days before the blog. 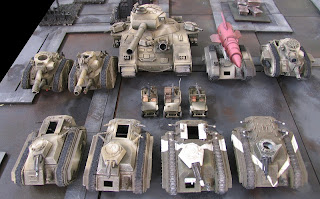 My army: 2000 points of Romanov Rifles. I gave Steph a 500 point advantage as I thought the baneblade would be overpowering in this relatively small battle. Boy was I wrong..... 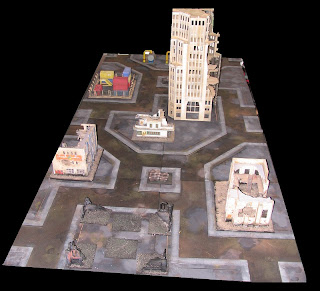 The table in all it's glory. The centrepiece was the skyscraper that also saw the bulk of the fighting. 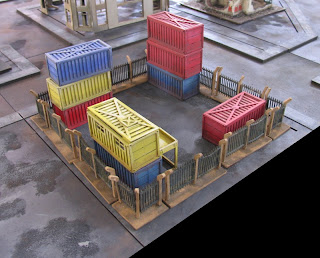 The container terminal, made up of these parts:
30mm containers
security fencing kit
site office kit 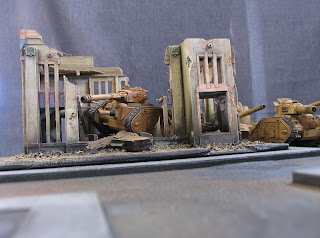 Steph's warlord tank in the ruins of the furniture factory 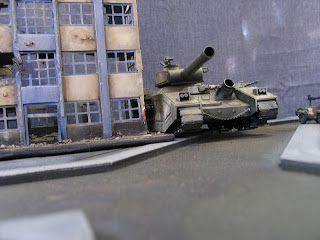 The baneblade near the ruins of the other factory.