Card models are not weak.

I was going to make the title of this post "Are Card Models Weak?" but then I would have been playing into Betteridge's Law Of Headlines.

I spent a bit of the afternoon doing my first YouTube video to demonstrate that what most people think about card models is wrong. 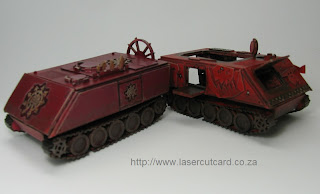 These are the two models I used for the test. They are based on the generic tracked APC. One has been used to test a chaos vehicle accessory kit and the other was an early test model that I made up with the doors and hatches all open.

These are the models *after* the testing... you can see some damage to the spikes on the top of the chaos on and the top hatch of the ork one broke off (as did the tracks). They were simply glued on again.